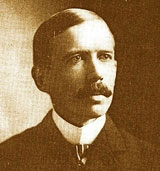 John Hyde was born in Illinois in 1865, the son of a Presbyterian minister. In 1892, he departed to India to preach in the Punjab region.

As he was partially deaf, he struggled to learn the native languages. His mission at first gained few converts and endured persecution. In 1896 there were no conversions at all. This greatly disturbed John and he went to prayer to “find the reason.” Hyde and his fellow intercessors saw that there was one method to obtaining spiritual awakening — by prayer.

“Praying Hyde,” as he was called, spent days and nights in prayer for an awakening throughout India. In 1904, Indian Christians and western missionaries gathered for the first of an annual series of conventions at Sialkot in what is today Pakistan. John’s prayers were answered in a series of outpourings of the Spirit. Often the glory rested on these meetings in a mighty way, while hidden, out of sight, John Hyde and a faithful few travailed in prayer.

John was willing to pay the price and lay down his own life so that God’s kingdom could come in power in India. He entered into the sufferings of Christ, dying at the age of 47 from the effects of his intense life of intercession without food or sleep. His heart had moved from its normal position (in the left) to the right. He went home to America and died there, in February 1912. His last words were “Shout the victory of Jesus Christ!”

The Sialkot revival still continued after John’s death in 1912; yet he truly was the one that played a major part in it.

John Hyde: The Apostle of Prayer by Francis McGraw

John Hyde was constantly in the prayer room day and night; he lived there as on the Mount of Transfiguration. The words were burned into his brain as a command from God: “I have set watchmen upon thy walls, O Jerusalem, which shall never hold their peace day nor night…” (Isa. 62 :6, 7).

One thought was constantly uppermost in his mind: that our Lord still agonizes for souls. Many times he used to quote from the Old and New Testaments, especially as to the privilege of “filling up that which was lacking of the afflictions of Christ.”(Colossians 1:24) He would speak of the vow made by our Lord devoting a long drawn out travail of soul till all his own were safely folded. “For I say unto you that I shall not drink henceforth of the fruit of the vine till that day when I drink it new with you in my Father’s kingdom.” (Luke 22:18) These were some of the verses used of God to open his eyes to the fellowship of Christ’s sufferings.

“After Jesus had gone indoors, his disciples asked him privately, ‘Why couldn’t we drive it out?’
He replied, ‘This kind can come out only by prayer and fasting.’”
Mark 9:28-29

“I never before knew what it was to work all day and then pray all night before God for another… In college or at parties at home, I used to keep such hours for myself, or pleasure, and can I not do as much for God and souls?”

“We must exercise the greatest care to be utterly obedient to Him who sees all the battlefield all the time. It is only He who can put each man in the place where his life can count for the most.”

“Is the Holy Spirit first in your pulpits, pastors? Do you consciously put him in front and keep yourselves behind him, when preaching? Teachers, when you are asked hard questions do you ask his aid as a witness of all Christ’s life? He alone was a witness of the incarnation, the miracles, the death and the resurrection of Christ. So he is the only witness!”

“Self must be crucified, dead and buried with Christ, If not ‘buried’ the stench of the old man will frighten souls away, then the new man will be revived, raised and seated —the corresponding steps upward which God permits us to take. Then indeed Christ is lifted up in our lives and he cannot fail to attract souls to himself. All this is the result of a close union and communion, that is ‘fellowship’ with him in his sufferings!”

“Christ took this place: became man for me. Christ became a slave for me. He washed His disciples’ feet — this was the work of a slave. He stooped and became a slave for me. I saw more, I saw that my Jesus, became a dog, a Pariah dog, for me. Just like the Syrophenecian woman, and how Jesus applied the contemptible word—’ dog’—to her and the Gentiles. The Holy Spirit led my thoughts to the truth that Jesus had died for the Gentiles, for these dogs — then it must be that Jesus had taken the dog’s place. Christ would never have used the epithet ‘dog’ of a human being without a great purpose in view, and it was this — He wanted men to realize that He had gone down, even below men for the purpose of lifting them up.”