Life Invested in Tibet:
The Apostle of the Bleeding Feet 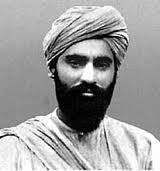 Sundar Singh was born in 1889 into a wealthy Sikh family in Rampur, India. At the age of 14, on the night before a planned suicide, he cried out to God to show himself. Jesus appeared to Sundar in a vision saying, “I died for you. I am the Savior of the world.” This encounter was so powerful, that Sundar dedicated his life to following Jesus and sharing the Gospel.

Disowned by his family, Sundar decided to become a Sadhu (holy man) at 16 and began his missionary wanderings, barefooted and with no possessions. (One of the most striking qualities about Sundar was the boldness with which he stood for Christ.) At first, the Sadhu preached the Gospel in his native place and in the surrounding villages, through the Punjab to Afghanistan and Kashmir—lands in which Christian missions had scarcely begun any work at that time. His greatest desire was to share the gospel in Tibet. Through very strong opposition and persecution, he traveled there, and God was faithful to save him from many dangers so that he could witness for Christ. His missionary journeys also led him to Nepal, Europe, America, and Australia.

Singh took over 40 journeys, barefoot, into Tibet to share the gospel. His final journey there in 1929 resulted in his disappearance and death: whether he died of exhaustion or reached the mountains remains a mystery. His friends went all the way to search him but never found him.

“I feel no fear at the thought of one day dying in Tibet. When that day comes I shall welcome it with joy. Each year I go back to Tibet, and perhaps even next year you will hear that I have lost my life there. Do not then think ‘ He is dead,’ but say: ‘He has entered Heaven and Eternal Life; he is with Christ in the perfect life.’ ” –Sundar Singh

Sundar Singh: Footprints Over the Mountains
By Janet & Geoff Benge
Wisdom of the Sadhu: Teachings of Sundar Singh
By Sadhu Singh

“From my many years experience I can unhesitatingly say that the cross bears those who bear the cross.”

“Prayer does not mean asking God for all kinds of things we want; it is rather the desire for God Himself, the only Giver of Life.”

“I am not worthy to follow in the steps of my Lord,” he said, “but like Him, I want no home, no possessions. Like Him I will belong to the road, sharing the suffering of my people, eating with those who will give me shelter, and telling all people of the love of God.”

“As long as I am in this world, I have vowed my life to Him, and His grace abiding I shall never break my vow.”

“We Indians do not want a doctrine, not even a religious doctrine, we have enough and more than enough of that kind of thing; we are tired of doctrines. We need the Living Christ. India wants people who will not only preach and teach, but workers whose whole life and temper is a revelation of Jesus Christ.”

“While I was in Tibet I saw a Buddhist, a monk, who had lived for five or six years in a cave. When he went into the cave he had good eyesight. But because he stayed so long in the darkness his eyes grew weaker and weaker, and at last he became quite blind. It is just the same with us. If we do not use the blessings which we have received from God for His Glory, we are in danger of losing them for ever.”

“The true Christian is like sandalwood, which imparts its fragrance to the axe which cuts it, without doing any harm in return.”

“Salt, when dissolved in water, may disappear, but it does not cease to exist. We can be sure of its presence by tasting the water. Likewise, the indwelling Christ, though unseen, will be made evident to others from the love which he imparts to us.”

“In a Tibetan village I noticed a crowd of people standing under a burning tree and looking up into the branches. I came near and discovered in the branches a bird which was anxiously flying round a nest full of young ones. The mother bird wanted to save her little ones, but she could not. When the fire reached the nest the people waited breathlessly to see what she would do. No one could climb the tree, no one could help her. Now she could easily have saved her own life by flight, but instead of fleeing she sat down on the nest, covering the little ones carefully with her wings. The fire seized her and burnt her to ashes. She showed her love to her little ones by giving her life for them. If then, this little insignificant creature had such love, how much more must our Heavenly Father love His children, the Creator love His creatures!”

“One day after a long journey, I rested in front of a house. Suddenly a sparrow came towards me blown helplessly by a strong wind. From another direction, an eagle dived to catch the panicky sparrow. Threatened from different directions, the sparrow flew into my lap. By choice, it would not normally do that. However, the little bird was seeking for a refuge from a great danger. Likewise, the violent winds of suffering and trouble blow us into the Lord’s protective hands.”